Brawny, brazen thieves broke into Berlin's Bode Museum just after 3 a.m. on Monday and bolted with the "Big Maple Leaf," a Canadian-minted coin weighing 220 pounds and worth $4.4 million. 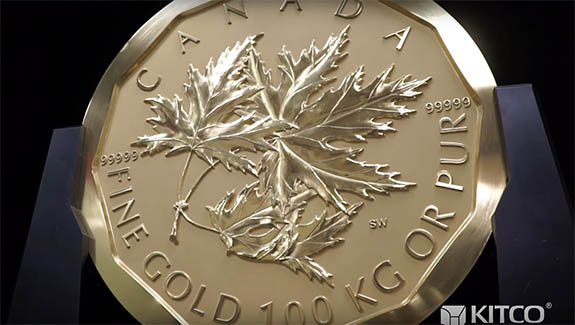 Measuring 20.8 inches in diameter, the coin was unveiled in 2007 as the world's largest. While the original remained in a high-security vault in Ottawa, five others were minted and sold to private interests. The Bode Museum had acquired its version of the Big Maple Leaf in 2010 and put it on display in a bulletproof glass box.

The obverse depicts the image of Queen Elizabeth II and the reverse features the image of Canada's national symbol, the maple leaf.

German police reported that the thieves used a ladder to enter the museum through a second-floor window in the back of the building, which lies along railroad tracks. Their target was on the first floor, so after smashing the case they had to manhandle the massive coin across the museum, up one flight of stairs and then out the second-floor window.

It's not clear whether the thieves climbed down with the coin or tossed it from the window. Authorities also believe the robbers used a wheelbarrow to transport the coin to the getaway vehicle. Authorities did not reveal whether any alarms were set off or if they have security video of the crime taking place.

The museum houses one of the most important numismatic collections in the world, totaling about 500,000 items, but no other coins or artifacts were touched during the robbery.

An ex-Mountie told the Toronto Star that the massive one-inch-thick coin may already have been melted down.

Despite the seriousness of the crime, The Mississauga News couldn't resist delivering this clever quip on its Twitter page: "Good luck finding a vending machine that will take that sucker."